This paper discusses mixing of some non-linear chaotic maps, e.g. a logistic equation and a tent mapping, as simplified method for information encryption and decryption. A ciphertext is obtained by the iteration of defined mixing chaotic maps from an initial state. Because the secure control parameters of these chaotic mappings are modulated according to currently encrypted plaintext, the proposed cipher algorithm can be treated as some homophonic substitution cipher with encryption key defined by initial state of build-in chaotic maps and some additional parameters. The resulting cipher algorithm is investigated against typical attacks on classical encryption schemes. The objective of these attacks is to recover plaintext from ciphertext or to deduce the decryption key. In this paper we study the exhaustive key search attack and find that this attack is not efficient as a practical attack on proposed cipher. Similar conclusion concerns some classical attacks, e.g.: ciphertext-only attacks and a known-plaintext attacks. 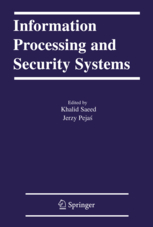