Positron emission tomography (PET) with 15O-labeled water (H2 15O) facilitates the visualization and quantification of blood flow in clinical investigations and also in small animals. The quantification of blood flow requires an input function, which is generally obtained by measuring radioactivity in arterial blood withdrawn during PET scanning. However, this approach is not always feasible, because abundant blood sampling may affect the physiological process being measured. The purpose of the present study was to develop and cross-validate two methods, namely, a blood- and an image-based method for obtaining the input function for blood flow studies from rat H2 15O PET.

The study material consisted of two separate groups of rats. Group 1 rats were imaged twice by a high-resolution research tomograph PET camera at resting condition for a test–retest study (n = 4), and group 2 rats were imaged with and without adenosine infusion for a rest–stress study (n = 4). In group 1, radioactivity concentration in arterial blood was measured with a new flow-through detector during imaging and a blood-based input function was obtained. The image-based input function was estimated using time-activity curves from the left ventricle and myocardial regions. To validate the two input function methods, myocardial blood flow (MBF) and cerebral blood flow (CBF) were computed, and the methods were tested for reproducibility (test–retest study) and changes (rest–stress study).

The blood- and image-based input functions were similar, and the corresponding CBF values differed only by −6.9 ± 8.1%. In the test–retest study, both MBF and CBF showed good reproducibility, and in the rest–stress study, adenosine significantly increased both MBF (P = 0.035) and CBF (P = 0.029), compared with the resting condition. 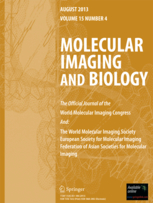