Southwestern Turkey experienced a transition from crustal shortening to extension during Late Cenozoic, and evidence of this was recorded in four distinct basin types in the Muğla–Gökova Gulf region. During the Oligocene–Early Miocene, the upper slices of the southerly moving Lycian Nappes turned into north-dipping normal faults due to the acceleration of gravity. The Kale–Tavas Basin developed as a piggyback basin along the fault plane on hanging wall blocks of these normal faults. During Middle Miocene, a shift had occurred from local extension to N–S compression/transpression, during which sediments in the Eskihisar–Tınaz Basins were deposited in pull-apart regions of the Menderes Massif cover units, where nappe slices were already eroded. During the Late Miocene–Pliocene, a hiatus occurred from previous compressional/transpressional tectonism along intermountain basins and Yatağan Basin fills were deposited on Menderes Massif, Lycian Nappes, and on top of Oligo–Miocene sediments. Plio-Quaternary marked the activation of N–S extension and the development of the E–W-trending Muğla–Gökova Grabens, co-genetic equivalents of which are common throughout western Anatolia. Thus, the tectonic evolution of the western Anotolia during late Cenozoic was shifting from compressional to extensional with a relaxation period, suggesting a non-uniform evolution. 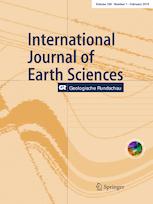