The article presents the Polish Private International Law of 2011 at the background of the acts from 1926 and 1965 and in the context of European integration. Reason for codification in 1926 was the creating of common Polish rules of conflict of laws, while the act of 1965 had to harmonize this rules with the Polish Civil Code from 1964. The preparation of the new act started in 2001. In the beginning one argument for a new PIL act was to adopt the Polish to the EU rules already before the accession of the country. This argument fell away with the accession to EU in 2004. Starting from 2000 more and more issues of the law of became subject to EU regulations, which do not require implementation to national law. Basically the new act follows the construction of the old PIL with general provisions at the beginning. The new act is much longer than its predecessors, which results rather from more detailed regulation (so for the law of individuals, legal persons, family and guardianship) than from covering new areas of private law by explicit rules. A substantial innovation is the broader range for choice of law, e.g. in matters of family and succession law, also have been introduced conflict rules on representation. The provisions referring to EU or international PIL instruments are a new feature in Polish PIL as well. While they have been introduced to remind the practitioners of those acts, in the way there are formulated they might raise some concerns: since they are placed in the specific sections (like obligation law or marriage law) they might create the impression, that these acts do not abrogate the general provisions of Polish PIL. The only provision in the PIL 2011 implementing EU-Law is the provision on consumer contracts. The new PIL cannot be seen as a total rupture, since its provisions and structure base on the old law, but it breaks with the Polish tradition of short and by the same time complete acts. An alternative to the recodification might have been the novelization of the act of 1965 by introducing a general provision reminding the priority of EU and international law and abrogating the rules on issues now being object to EU regulation, since there have not been documented any severe problems with the application of the PIL1965 by the courts. That would have granted legal stability until a complete unification by EU Law or the passing of a new codification of Polish civil law. The option of preparing a new PIL prevailed probably, because it was politically more attractive and because a draft for a modest reform of the old law had never been formulated. A reformed PIL from 1965 would have had the same problem as the new act from 2011: as long as no codification of PIL or its general principles by the EU exists, there is still the need for specific and general rules in national PIL, but due to the many issues already belonging to EU legislation a national PIL act cannot be a complete codification any more. 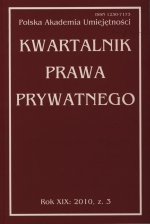