The memoir literature can be used as a basic historical source besides the archival documents. Even combats of the final phase of the World War II in South-Western Slovakia can use some of such books. There are two main groups of authors: German Generals (Heinz Guderian, Johannes Frieβner, Hermann Balck) were more or less responsible for leading German military operations in this area. They offer their point of view, seen from their staff-offices, focusing on operational problems, sometimes justifying their own decisions that might have shown themselves wrong. The other group of authors (H. Schmidt, E.-N. von Diest-Körber, K. Volleth, F. Hirschfelder) consist of minor officers and common soldiers. They report of their experiences much more common way, recording their everyday problems, fears, opinions. Thus they enable us to see them not only as members of a certain army, but also as humans. 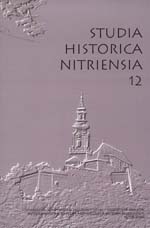