Litter production is essential for transfer of energy and nutrients from plant to soil. This paper aims to relate the phenology of litter-fall by common oak (Quercus robur L.) to specific climatic factors. Over three years, two natural stands of Quercus robur (Cerceda with latitude 43 degrees 11'N and longitude 8 degrees 28'W and Lourizan with latitude 42 degrees 25'N and longitude 8 degrees 40'W) near to fifty years old and located in Galicia, Northwest of Spain, were thoroughly studied in the period 1992-1994. The litter was collected in five litter traps (0.5 m wide, 20 cm high) located within a plot of 100 m2. Annual litterfall values were similar in both stands, being approximately between 6 and 11 Tm [dot] ha^-1 (dry weight); the southern stand showed a higher interannual variability. The leaf fraction accounted for the highest percentage of total litter production. Usually it represents more than 70% of annual production, but it has been exceeded by fruits production in the corresponding season (spring in the north and summer in the south). The climatic parameters that had the greatest influence on litter production were total precipitation and absolute maximum temperature with a correlation always higher than 65%. It allows to link litter production with climate parameters with an adjusted correlation coefficient around 70 %, even more in the south plot (Lourizan). With an easy ANOVA analysis it is possible to distinguish the season with greater litter production; it is the autumn in all cases except fruits production as was said above.

Museum and Institute of Zoology, Polish Academy of Sciences 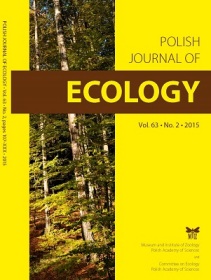