Differential effects of vanadium, tungsten and molybdenum on inhibition of glucose formation in renal tubules and hepatocytes of control and diabetic rabbits: beneficial action of melatonin and N-acetylcysteine

Effect of vanadyl acetylacetonate (VAc), tungstate and molybdate on gluconeogenesis has been studied in isolated hepatocytes and kidney-cortex tubules. In renal tubules of control and alloxan-diabetic animals, the rank order of the metal-compounds-induced (i) inhibition of glucose formation from alanine+glycerol+octanoate or aspartate+glycerol+octanoate, (ii) decrease in the mitochondrial membrane potential (delta psim), (iii) increase in the hydroxyl free radicals (HFR) generation and (iv) decline in glucose-6-phosphatase activity was the following: VAc > tungstate > molybdate. Moreover, in contrast to VAc, both tungstate and molybdate at 100 microM concentration did not practically decrease glucose production in hepatocytes isolated from diabetic rabbits, and significantly increased the rate of lactate formation in renal tubules. N-acetylcysteine at 2 mM concentration partially attenuated vanadium-induced alterations in glucose formation, delta psim and the cellular glutathione redox state, whereas 0.1 mM melatonin did not abolish vanadium-induced changes in gluconeogenesis despite attenuation of vanadium effects on HFR formation and delta psim decline. However, similarly to control rabbits, following 6 days of intraperitoneal administration of both VAc (1.275 mg V/kg body weight daily) and melatonin (1 mg/kg body weight daily) to alloxan-diabetic animals, vanadium-induced elevated serum creatinine and urea levels were decreased, indicating the beneficial effect of melatonin on diabetes- and vanadium-induced nephrotoxicity in rabbits. As serum glucose levels were also significantly diminished by vanadium+melatonin treatment of diabetic animals, the combination therapy of vanadium compounds and melatonin needs a careful evaluation. 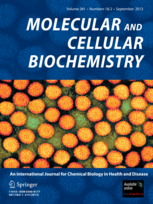