The article presents the evolution of dog's view in Polish language within the centuries - from Old Polish to the present, considering vocabulary dialect. The components of a dichotomous present stereotype of dog (the two negative ones and one positive) are analyzed in the work. The negative ones seem to belong to the older structure of the language. The example of as­ sociation with 'a lie' - in Polish 'lze jak pies' - and its metaphorical meaning of the verb, is well - known from the Old Polish and still used, however, less frequent. The phenomenon seems to be similar to the attributing a dog with its small value, as it is documented in the used meanings of adjectives such as: psi / pieski (‘dog-ass'). Late testified, but extremely important element of the dog's view, is associating it with dog's fidelity that was expressed in a phrase 'wierny jak pies' - that is focused on being a faithful dog. This combination of two meanings resulting in its dichotomy, and even its internal contradiction, rejected the negative stereotype of a dog. Nowadays, due to the cultural changes including our attitude to animals generally, especially domestic ones, its primary association with fidelity seems to be priority. 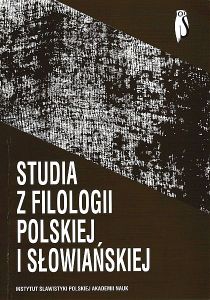