The understanding of scholasticism metaphysics presented in textbooks to the history of philosophy would be comprises universally in the patern dominated by followers of Thomas Aqiunas's conception. However one should be value different metaphysical conceptions of this period of scholasticism, in this the first of all so criticized by Thomas's pupils thought of John Duns Scotus. It is possible put, that Scotus's metaphysics states very important alternative for Aquinas's metaphysics, though - it should be strongly underline - at all it not locates itself in so sharp opposition in relation to solution of Aquinas. To be visible influence Scotus's thought in later centuries, for example his metaphysical intuition we can see at F. Suarez, Ch. Wolff, and also I. Kant. The novum of Scotus's approach to metaphysics in large reduction depends thereon that he asks about conditions of metaphysics possibility. This resulted with perspective of later development of metaphysics two momentous decision in its area. firstly, Scotus captured metaphysics with perspective of transcendental then it means he understood metaphysics as transcendental science. Secondly, basis of such metaphysics resulted in execution 'the criticism of reason'. From this perspective Scotus proposed understanding of the metaphysics as science on the first adequate object of human intellect. The object of it is being as being (ens inquantum ens) and in consequence the metaphysics according to Scotus is science on being and its transcendental proprieties. The metaphysics is so transcendental science - scientia transcendens. 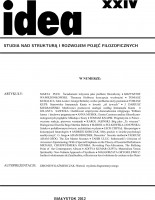