The article describes research series entitled 'Acta Universitatis Lodziesis. Folia Librorum' edited in 1989-2009. Its predecessors were 'Acta Universitatis Lodziensis. Seria I, Nauki Humanistyczno-Spoleczne' (1975-1980) and 'Acta Universitatis Lodziensis. Folia Scientiarum Artium et Librorum' (1981-1987). The author presents the editorial staff, co-workers, publishing features and subject areas covered by 'Folia Librorum' between 1989 and 2009. The periodical is published once or twice a year. Currently the editor in chief is Jadwiga Konieczna and editor's secretary is Evelina Kristanova. Article contributors are mainly researchers, academics, librarians and bibliophiles. The articles are divided into three sections: books, press and libraries. There were some monographic works too: doctoral theses and professor works of the Chair of the Library and Information Science staff at the University of Lodz. In the latest volume 15 of 2009 articles covered also contemporary library, bibliology and press-related problems. From 2006 'Folia Librorum' has had its own website with fulltext version. 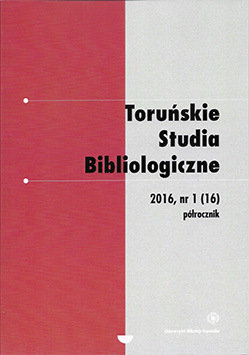