The article has been written to commemorate the first decade of 'Rocznik Teologii Katolickiej' ('Journal of Catholic Theology'). The idea to start it emerged during the i rst months after the opening of the Chair of Catholic Theology in the University of Bialystok. It was then decided to base it on the existing scientific journal. The first volume, called 'Biuletyn Teologii Katolickiej' ('Bulletin of Catholic Theology') was a part of the 18th volume of 'Studia Teologiczne - Bialystok, Drohiczyn, Lomza' ('Studies in Theology - Bialystok, Drohiczyn, Lomza') in 2000. The next volume appeared separately, but still under the aegis of the 'Studies'. The 'Journal' became an independent magazine in 2002. Its aim is to present the Chair's publications, popularize theological science in Bialystok academic circles, cooperate with researchers in philosophy, arts and humanities and natural sciences and sharing experience with scientific centres home and abroad. 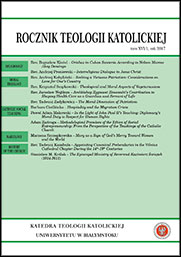