Changing social reality provides authors of the periodical press, especially the dailies, with unpredictable situations which they have to cope with. In the paper the author deals with the structural-compositional issues of the daily periodical press using the example of the Slovak quality daily SME. By means of an empirical research of the structure of SME in 2008 and 2009, he takes notice of the impact of unpredictable events having influence on the whole society on the layout of one issue. He takes into account the fact that informing about important events requires devoting adequate space to the sheet of the newspaper, whereby it comes to the breaking of a long-term model of the periodical. It is characterized by a relatively constant setting of the content and stable amount of the pages of the title in individual issues, which results into certain structure of a newspaper unit. Therefore, the reader is able to orientate fast in the newspaper. The outcome of the empirical part is represented by discussing aspects of contemporary situation on the market with the dailies and its reasons; delimiting newspaper unit as well as its components, in the context of accessible notions of Slovak and foreign newspaper science. Special attention is paid to the structure of a newspaper unit from methodological viewpoint and immediate interference into it, which is shown by the breaking of the stable structure of a newspaper. 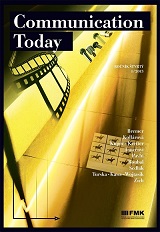