The article provides an overview of denominational periodicals published in the Krakow Voivodeship in the years 1918-1939. Of these, thirty-three periodicals were associated with the Roman Catholic Church and two ephemeral periodicals ('Hapardes' and 'Tece Torah') were published by the followers of Judaism. The Catholic periodicals were available in thirteen towns, including fourteen in Tarnów, three in Tuchów and two or one in the other towns. In accordance with the classification included in 'Encyklopedia Katolicka' (Catholic Encyclopaedia), the author divides these periodicals into diocesan periodicals, including those related to administrative (1) and organisational matters (5), and pastoral periodicals, including those related to eucharistic matters (1), priesthood (5), Blessed Virgin Mary (4), parish matters (3), retreats (1) and religious spirituality (3). 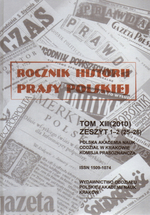