THE PROBLEM OF THE REFERENCE OF MASCULINE NOUNS DENOTING PEOPLE

The article analyzes the reference of masculine nouns denoting people, with the aim of establishing the factors influencing the modifications of gender references of these nouns. The data analyzed come from several nationwide newspapers and magazines (Gazeta Wyborcza, Polityka, Wysokie Obcasy, TwĂłj Styl) from the period 2001-2003 and questionnaires administered in 2005 to students in five Polish university towns (Warszawa, KrakĂłw, Poznan, Wroclaw, Lublin). It has been established that gender reference of masculine nouns is determined, among others, by the context of their use and the speakers' knowledge of the words' denotata. Reference is linked to the profiling of the words in question. Gender is neutralized in a general profile, but highlighted in masculine and feminine profiles. The general profile has been accepted as prototypical for masculine nouns in plural, the masculine profile for their use in singular. The feminine profile appears as weakly conventionalized, realized mainly at the level of a specific speech act. 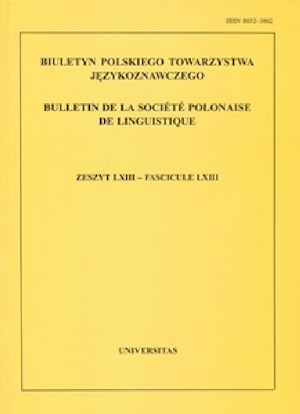